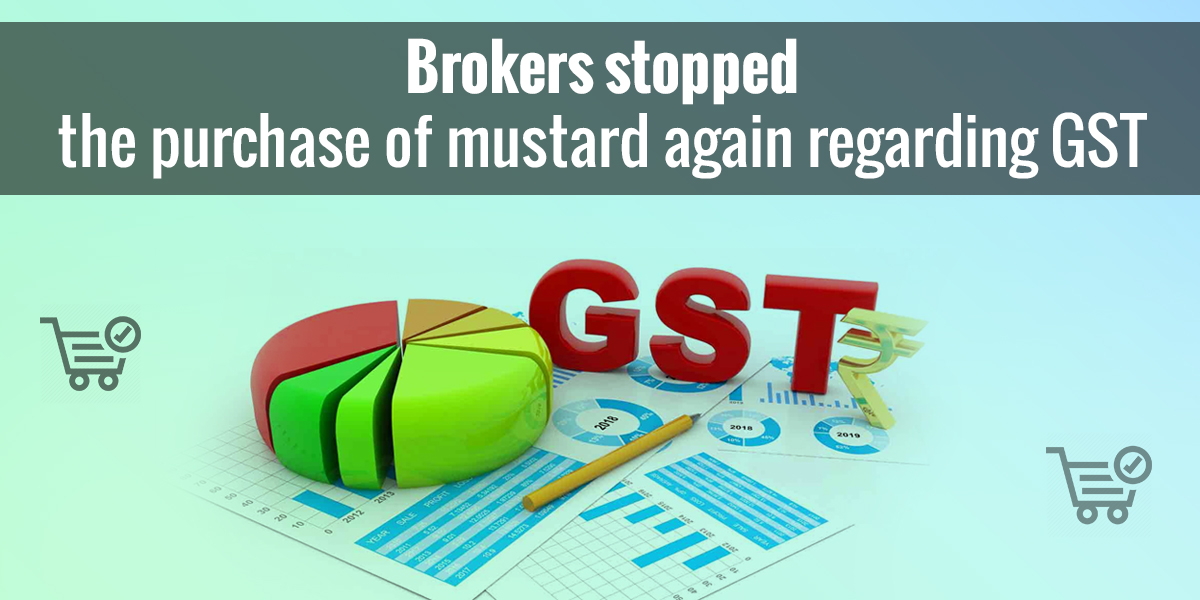 Aristocrats have once again stopped purchasing mustard on GST. Due to this, messages were not sent to farmers on Thursday. The agents said that they will not start buying till the problem of GST is resolved. Warehouse Officers also assured to get GST returns in 8 hours. Even after this, the agents are not ready to buy. Authorities have assured to issue a letter of non-levy of GST on mustard purchase. The commissioners said they would start buying only after the letter was released.

The purchase was started by the State Ware House from May 1. In the first day, the adhatiyas opposed the 5 percent GST imposed on mustard. Also, the condition of the advance check of five lakh rupees was also kept. It was agreed not to take the check-in a meeting with the market committee officials. It was also agreed that the agents would pay GST. Later GST will be returned to them. The artisans bought mustard for two days. After that, the purchase of mustard stopped. The purchase process was postponed for pickup on May 4 and 5. Now the stockists have protested when the purchase has started again.

So far, 95 thousand bags of mustard have been picked up from Mahendragarh Grain Market to Mandi. Now only 15 thousand bags are outstanding in Mandi. More than 43 thousand bags were collected in Mandi last week.
Due to this, there was no space left for the mustard pile in the market. So far, 1 lakh 10 thousand bags of mustard have been procured in the grain market. The lifting process was very slow in the third week of April. Due to which heap of sacks kept in the market. By the end of the month, there was no place to keep the mustard sack in the market. Now lifting is being done by the district administration. Messages are being made according to the alphabet for mustard purchase.

Mustard purchase
Satnali market started in the Satnali grain market. Mustard procurement process resumed on Thursday after the GST dispute was resolved between the procurement agency and the agents in Satnali Grain Market. Let me tell you that there was a dispute between Ghats and the procurement agency on GST on Wednesday. After this, the artisans stopped purchasing mustard.

Hafed DM Jitendra Singh reached Nara Mandi on the information about the purchase by the artisans. Talked to the artisans but the problem continued till the evening. After the dispute was resolved on Thursday, the mustard procurement process started again in the grain market. Due to which the farmers breathed a sigh of relief. On the other hand, the procurement of wheat and gram continued in the grain market. Market Committee Oxon Recorder Dara Singh said that 200 farmers were messaged on Wednesday to purchase mustard. The jobbers have started buying. So far 37997 quintal mustard and 63336 quintals wheat and 7305 quintal gram have been purchased in the mandi. Bus Stand Purchase Center Supervisor Ravindra Kumar informed that 26068 quintal mustard has been procured so far. A total of 64065 quintal mustard has been procured at both the procurement centers.