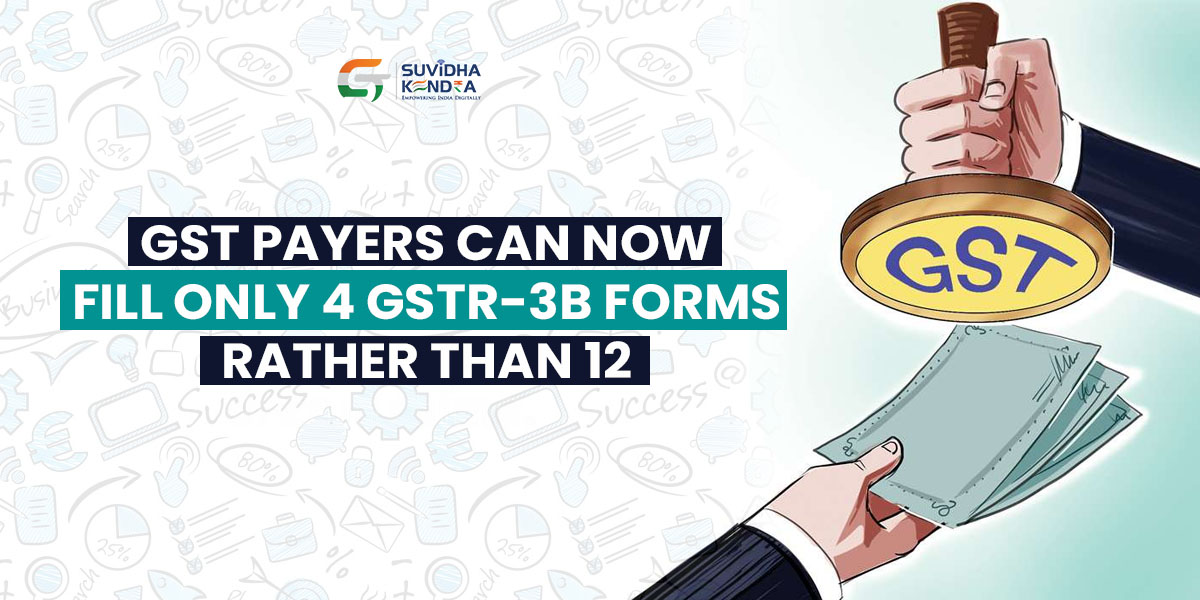 Come January 1 and GST payers are going to be required to fill only 4 GSTR-3B returns during a year rather than the present 12 returns.

In a major reform, the govt has started a quarterly filing of returns with the monthly payment (QRMP) scheme by reducing the experience of return filing for GST taxpayers. Sources within the Department of Revenue (DOR) said that the scheme would affect about 94 lakh taxpayers, which is about 92 percent of the entire assets of GST, whose annual gross turnover (AATO) is up to Rs 5 crore.

According to DoR sources, to implement the quarterly scheme in GST, the tiny taxpayer from January is required to file only 8 returns (4 GSTR-3B and 4 GSTR-1 returns) rather than these 16 returns during a fiscal year. Will be additionally, taxpayers’ professional expenses on return filing are going to be significantly reduced, as they currently need to file only half the returns in situ of 16.
The scheme is going to be available on the overall portal of GST, with the power to pick and re-select it if one so desires.

Sources said that this only brings within the concept of providing input decrease (ITC) on the alleged invoice, thereby placing a big check on the threat of faux invoice fraud.

Sources aware of the case said that the QRMP scheme has an optional facility for invoice filing facility (IFF) to scale back business-related difficulties for little and medium taxpayers.

Under the IFF facility, small taxpayers who prefer to file quarterly returns under the QRMP scheme are going to be ready to upload and file such invoices within the first and second month of the quarter that the recipient is in demand.

In addition, it might include buyers who previously avoided purchases from small taxpayers within the desire to upload invoices to the system on a monthly basis.

According to sources, that the taxpayer won’t be required to upload and file all the invoices for the month and may only upload and enter those challans which require to be lodged within the IFF as per the demand of the recipients. The remaining invoices for the primary and second months are often uploaded in quarterly GSTR-1 returns. The IFF is going to be available until a deadline and therefore the recipient will receive the credit after the deadline of filing the IFF.

Explaining the development, sources said that under the QRMP scheme, the taxpayer would need to pay his dues as per his choice either by cash bookkeeping or through pre-filled invoices which were the cash payments of the previous quarter are going to be 35 percent. Or pay consistent with actual.

As such, a little taxpayer needs business support, especially within the last month of the quarter, which may be tax-relieving, by simply paying through a system-generated, pre-filled invoice. This can also reduce the late fees tribulation, as pre-filled invoices will allow taxpayers to deposit 35 percent of the monthly cash paid within the previous quarter within the electronic cash bearer.

This will be an optional facility available in situ of self-assessment within the first two months of 1 / 4. Taking advantage of this feature means self-assessing just one occasion 1 / 4, and reducing compliance costs for little taxpayers, the source said.

The scheme is predicated on the prevailing return system with suitable amendments to offer small and medium enterprises much-needed flexibility with reference to GST compliance and was approved in theory by the GST Council at its 42nd meeting on 5 October.