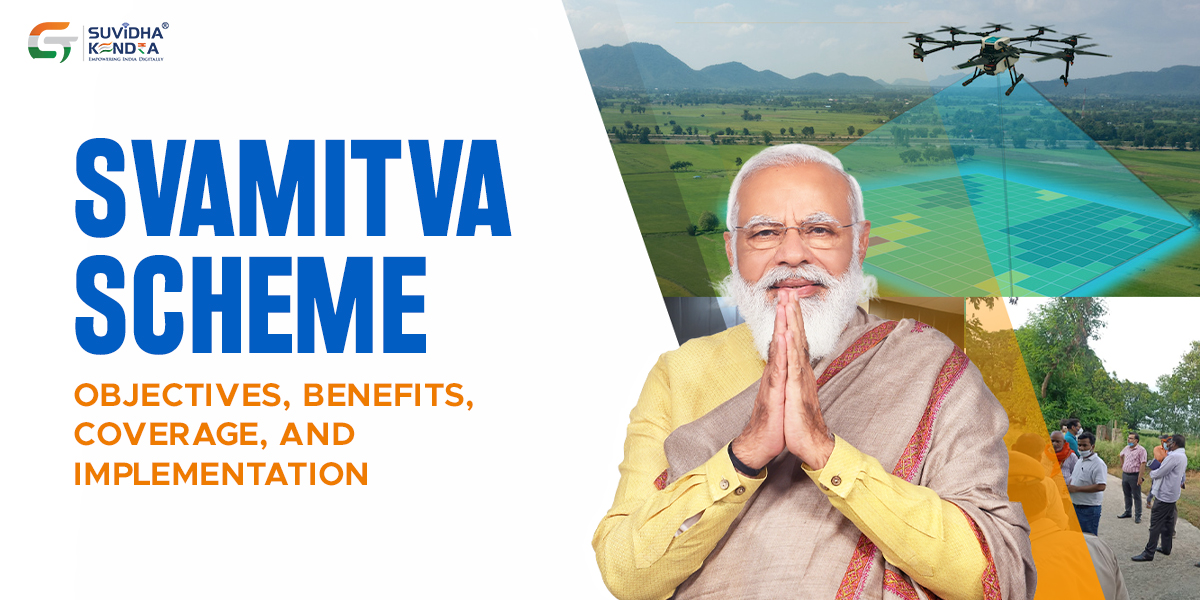 The land is one of the most critical factors of production. Some enterprises depend on land more than any other thing. For example, a real estate developer uses it to produce goods. But technology companies depend less on land. This makes it a less important factor of production.

There is a lack of separate Abadi areas all over India. It has led to the rise of land-conflict cases. The GOVERNMENT OF INDIA discovered a reformative step. They launched a yojana called the “SVAMITVA Scheme.”

Let’s read all about it.

SWAMITVA is an acronym for Survey of Villages Abadi & Mapping with Improvised Technology in Village areas. It is a project of the Central Sector under the Ministry of Panchayati Raj.

The scheme was launched all over the nation by Shri Narendra Modi (PM) on 24th April 2021. It aims to offer rural citizens the right to register their residential property. This will help them to use their property for economic goals.

The setting up of clear property ownership in rural populated areas is done by using three methods. These methods are:

On 24th April 2020, eGram Swaraj mobile app was launched by the Government. It is a platform that permits the citizens and Government to view the data. The data is on the monitoring, planning, and accounting needs of Panchayat in the nation. The app and the portal contain the progress status and reports of the scheme activities.

What was the need for the scheme?

There are over 50% of India’s population that lives in rural areas. These people do not have ownership records of their houses. Since the British era, farming land records have been maintained in villages, but there are no records of houses. As an outcome, many houses do not have property papers. The SVAMITVA scheme was set up to address this issue.

Objective of the Scheme

The scheme’s objective is to:

Benefits of the Scheme

The benefits of the scheme are as follows:

What is the SVAMITVA card?

As per the scheme, the SVAMITVA card is a property card. It will be given to each landowner. The card will aid them to provide an official record to the financial institutions. This support will be for the landowners who want to use their property/land in the future.

The scheme will cover almost 6.62 lakh villages in the nation. Besides this, the entire scheme work will likely take over 5 years of a time period.

In 2020-21, the pilot phase was executed in six states covering around 1 lakh villages. These states were-

The setting up of the CORS network is planned for Rajasthan and Punjab.

Phase II of the scheme includes the process and scope decision. It is for the “states” that have done the Abadi survey. The decision will be given after the discussion with the states and the Survey of India.

The phase includes overall coverage of around 6.62 lakh villages in the nation. Also, it includes the formation of a wide-ranging CORS network.

The outcome of the scheme would include a “record-of-rights” update in the property/revenue registers. It would also include property card distribution to the property owners. This would provide a facility to monetize rural residential assets for credit. This would also open the way for clear assurance of property tax.

Application Workflow of the Scheme

The board level of the scheme’s application workflow is given below: 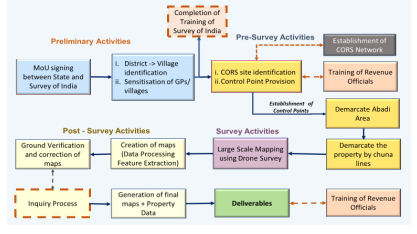 The SVAMITVA scheme has the potential to reform rural India. It has given a boost to the drone-producing ecosystem in the nation. Besides this, an outlay of Rs.566.23 Crore has been approved for the scheme application.