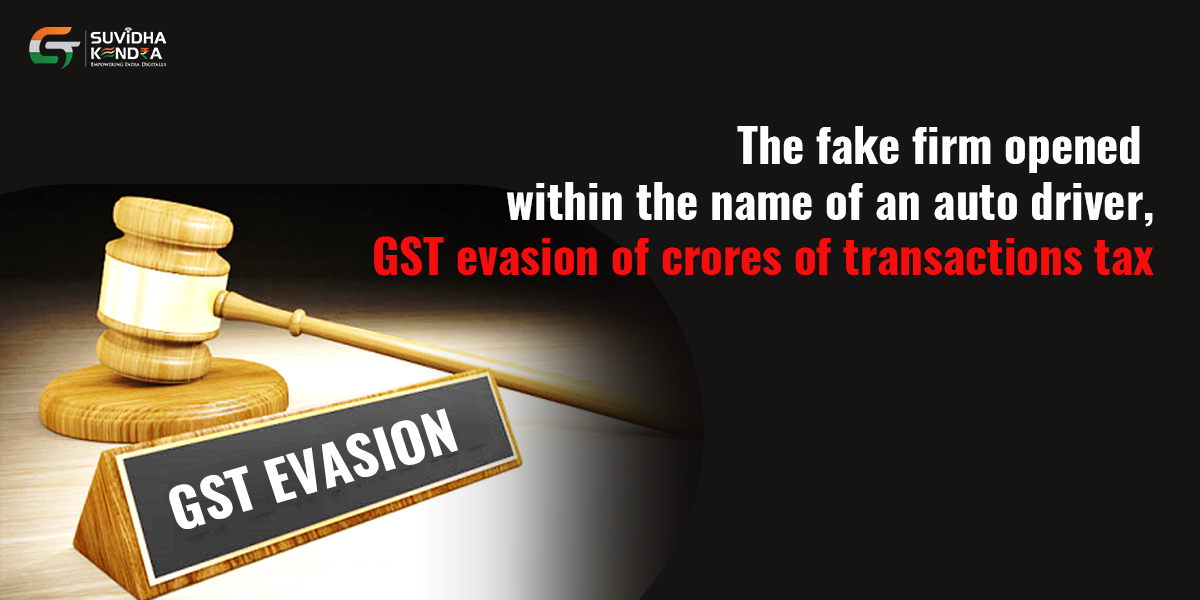 Fatehabad In Sirsa, a case of crores of rupees has been made by creating a fake firm within the name of an auto driver. It’s alleged that GST has been stolen by making a firm. Even buy-and-sell gift cards are swiped. 20 days later, another fake firm has been revealed. Earlier, it had been revealed that a fake firm was named after Chat Wale. the town police have registered a case against Ashok Goel and his son Ashish of Bhattumandi, Fatehabad, on charges of embezzlement, embezzlement on the complaint of Madan, a resident of Natar, a village driver in Sirsa.

In a complaint to the police, Madan, a resident of village Natar in Sirsa, said that he drives an auto within the city Sirsa. Ajan supplies goods of khal, jaggery, sugar, etc. to the mandi and nearby shops. Within the complaint, he said that he wont to come to Ashok Kumar for his add Bhattukalan Mandi. At times, the grain market wont to be found near the artisans in Sirsa. Ashok asks him what proportion money he earns, on which he wont to say that he makes a living. He told Ashok that if he gets a loan, he will buy Tata in order that he can do an honest job. It’s alleged that Ashok told that he features a business. He does business in Sirsa, Fatehabad, Hisar, Punjab and Rajasthan, will offer you a loan. I open your checking account, which can be easily available for your needs once the account is old. In December 2019, Ashok invited him to a grain shop in Fatehabad.

He made Aadhaar card, Took PAN card and photo, and got some papers signed. A couple of days later, Fatehabad then called at a store in Anajamandi and began saying that he had formed a firm within the name of Jam Packers. Supported this, the present account is going to be opened. Ashok Kumar Goyal also gave me 20 thousand rupees. Then Ashok Kumar Goyal called again at an equivalent shop and began saying that I even have to travel to Baddi Himachal Pradesh. I even have a business there. Even then, I opened my checking account. Within the complaint, Madan said that a couple of days ago a case was registered against Ashok. He has done business by creating a fake company. once I was unsure, I inquired at my level and it clothed that there have been crores of rupees transactions in my firm’s bank accounts, out of which it didn’t do any. It is alleged that Ashok also works with fake billing and swiping the gift card during a fake way without buying or selling any goods, Including Ashish Goel, the son of accused Ashok.

A fake firm opened within the name of the
first chatter 20 days ago, a street hawker of Chaat had disclosed a fake firm named after him. A fake steel firm was formed in Bahadurgarh and Kurukshetra within the name of Chatter Rehri, a resident of Sirsa. Ashok Goyal was also accused during this case. During this case, the Bhattu police had registered a case against Ashok Goyal, resident of Bhattumandi, Lalit Goyal, resident of Sirsa, and Anil Garg of Jamal, Sirsa, on the complaint of Sirsa resident Rajesh.

The case has been registered and began an investigation by the auto driver of Sirsa, alleging that the father-son has opened a fake firm in his name and has transacted crores of rupees. Investigation has been started by registering a case.